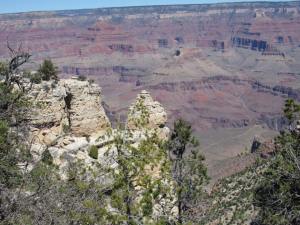 I retired three years ago. It seems to me that one of the purposes of retirement is to fill in the blanks of our lives–to do those things we were too busy to do during our careers. That’s why we make that requisite “bucket list.”

Having lived my entire life in Arizona, and being a avid hiker, I am embarrassed to admit that I have never been to the bottom of the Grand Canyon. About twelve years ago, Craig and I hiked down Bright Angel Trail to Plateau Point. It was a grueling nine-hour hike to complete the twelve miles in and out in one day.  Getting down was fairly easy, but the climb back up was exhausting. When we reached the rim I told Craig that we had to go directly to the lodge and eat dinner. I knew that once I got to our room I would not leave it until morning.

Surprisingly,  we are better prepared to hike the Canyon today than we were back then.  Busy with work, we had little time to hike on a regular basis. The only real planning we did for that trip was making reservations at the lodge.  Now that we are retired, we walk a two-mile route near our home almost every day. Once a week, we try to take a longer (4-7 mile hike). To get ready for this trek, we have been going on even  longer hikes up steeper elevations.

My biggest concern is carrying the gear, as we will be camping for two nights at Bright Angel Campground. Some thirty years ago, we went on backpacking trips with our son’s Boy Scout Troop. I recall being loaded down with heavy packs and hiking ten or twelve miles into the wilderness behind a gaggle of chattering scouts. Craig and I usually arrived first at the campsite. The boys took frequent breaks and I liked to keep going–not because I had more stamina, but because stopping meant taking off the pack and I wasn’t sure I would want to put it back on. It was better for me to just keep going.

Last summer Craig and I found a terrific deal on camping  backpacks at Costco. Apparently that was the impetus I needed to plan a hiking trip into the Canyon. The difficulty of getting a permit was an excuse I often used. Oddly enough, I was successful at getting  one on my first try.

One of the advantages of waiting so long to attempt this hike is that the equipment we need is better made, cheaper and more light-weight than it was thirty years ago. Back then, backpacks were huge monstrosities with frames for attaching sleeping bags and tents. Backpacking gear was horribly expensive.  We rented packs from the Hike Shack until we were able to purchase some used ones. Everything from tents to sleeping bags was heavy and bulky.  I suppose we have the space program to thank for the wonderful options we have today.

We were able to completely outfit our trip at Walmart.  There we 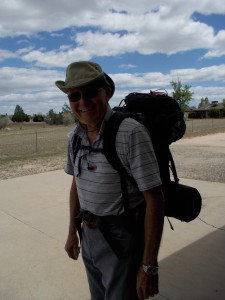 found sleeping bags that weigh less than two pounds and a two-person tent that weighs five. We bought everything we need for about $150. It all fit efficiently into our packs and we’ll be carrying less than thirty pounds on our backs.

With our packs loaded we went to a nearby trail and walked a four-mile circle. Everything went smoothly. Amazingly, I could hardly notice the weight. That’s because my pack is ergonomically designed to put the weight on my hips–not my back and shoulders.  I am feeling optimistic about the undertaking. I’ll let you know in a future post just how it went–complete with pictures, of course.

2 thoughts on “Getting Ready to Hike the Canyon (It only took 67 years.)”