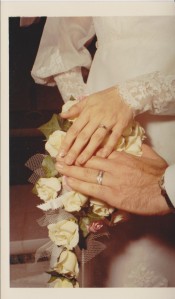 Jesus told several parables about the extent someone would go to in order to find something of great value. In each case, once the lost item was recovered, the owner called together friends and family to celebrate. I can relate to this in a very real way.

It was 1981 and my husband Craig and I were at the Jaycee National Convention in Cleveland, Ohio. We had attended the week-long convention which culminated in a parade through the streets of downtown Cleveland. We would be driving our new Audi in the parade. Since it had a sunroof, it was decided that the Arizona Jaycee president and his wife would sit on the roof of our car with their feet in the opening of the sun roof. This arrangement upset me greatly and I made it obvious that as the president of the Arizona Jaycee Women I thought I should be riding on the top of the car instead of inside.

I continued to pout and otherwise act like a spoiled child as I got into the car to start the parade. As I sat down in the passenger seat, my husband gasped, “Oh my gosh, your ring!” I looked down at my left hand to see a gaping hole where my diamond should have been. Now instead of being upset about my position in the parade, I could think of nothing else but the missing diamond.

To make matters worse, we had left our children with Craig’s grandparents in Kent. While we were visiting there, his grandmother showed me a diamond she had found and told me how important it was to have your set checked regularly. I had shrugged this off as something I didn’t have time for. Now I was faced with returning to Kent and admitting I had lost my diamond. Shame piled upon shame filled my heart and mind.

As the parade came to an end, I vowed to search every inch of downtown Cleveland until I found the diamond. Obviously this was an impossible task as I had no idea when or where I had lost it. Finding a needle in a haystack would have been an easier task. At least the search would be limited to the haystack.

Craig and I returned to the spot on the street where we had lined up for the parade. Both sides of the street were cluttered with trash. I looked at Craig and said, “It’s hopeless. Even if it’s here I’ll never find it.” Just as I was ready to give up, we looked across the street to where I had stood visiting some friends before the parade began. Craig and I noticed a tiny glint in the pavement under some litter. Certain it couldn’t possibly be the diamond, we raced across the street anyway. I’m not sure how much light a half-carat diamond can reflect, but it was enough. I bent down and brushed away the trash. There in the dirt-filled street lay my diamond.

Just as in the parable, I spent the rest of my time in Cleveland telling everyone I saw about my miracle experience. In the Handy Helpers book, A Rocky Start, Amber’s dad tells her that God’s mercy is what we need most when we deserve it the least. Certainly, there was nothing in my behavior that day that warranted any mercy but I received it anyway–proof that God responds to our needs even when we’re too self-absorbed to ask.