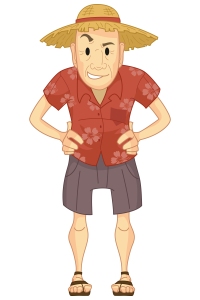 Gus Farley is the fun-loving founder of the Bluesky Senior Center. When he and his wife, Barbara, moved to Bluesky from Ohio, only a few families were living there. Gus had retired from his job as a machinist and found himself with lots of time on his hands. At first, he kept busy by whittling, a hobby he learned from his father. But eventually, he looked around for something else to do. Building the senior center in Bluesky was not his idea, but he made it his personal project. Gus and Babs, as everyone called her, worked tirelessly to raise money for the land and building. Their only son had been killed in Vietnam, so the citizens of Bluesky became their family. When Babs was diagnosed with cancer, Gus turned his attention to caring for her. After Babs passed away, the senior center became his refuge. Most days, Gus can be found sitting in the rec room with his cronies, Al, Bert and Norman, telling stories or playing checkers.

When Amber, Laura, and Melissa come to the senior center for the first time to watch Betty’s shuffleboard match, it is Gus who greets them and gives them a quick tutorial on shuffleboard. Later, when they return to sign up as junior volunteers, it is Gus who shows them around the place. After that, the girls come to expect Gus to be there to greet them,  ready with a joke or riddle.

“Tell them a joke before they leave,” Bert told Gus.

“Okay, why did the boy eat his homework?” Laura played along.

“His teacher said it was a piece of cake.”

Although Gus likes to dress up in crazy outfits and join in whatever fun stuff is going on, he does have his serious side. For example, when Amber is feeling guilty about some stunts she pulled to get even with Spike, Gus is there to help her see how much she is valued and loved.

“You know”–Gus became more serious–“I never had a daughter or a granddaughter, but if I did, I’d want her to be just like you.”

“Really?” Amber sounded doubtful. “Laura’s a lot smarter than I am, and Melissa is way prettier. Besides, I mess up a lot.”

“My wife, Barbara, would have loved you,” Gus said. “In some ways you remind me of her.”

“No, you don’t look too much like her, except for your eyes. She had the same warm, deep brown eyes you have. Sometimes there was a little mischief in them like I’ve seen in yours.”

In book three, after Spike’s mishap with the mayor, Spike expects a big lecture from Gus just like the one he received from his parents. Instead, Gus offers him a bit of advice in the form of a Bible scripture, “Do not be overcome by evil, but overcome evil with good.” Gus goes on to give Spike a little project to work on–something that makes all the difference in Spike’s attitude toward Todd.

Gus is the perfect example of Christian charity for the Handy Helpers. He is there to lend a hand when his neighbors are in need–always with a smile. He is patient with Warren Pritchard, who has some memory problems. He is kind to the Clawson sisters who are a little eccentric.  When the Cole children need a home, it is Gus who steps up. That guy named Gus–Bluesky just wouldn’t be the same without him.