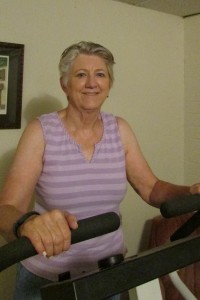 Why am I walking around my house in the dark at eleven p.m.? Do I need a drink of water or to use the bathroom? . . . Did I forget to plug in my phone or turn off my computer? . . . Was I awakened by a strange noise and I’ve gone to investigate?  No, it’s not for any of those logical reasons.  I am walking around in the dark because I still need four hundred more steps to earn my badge for 25,000 steps in one day. Sound crazy? Please allow me to explain.

For Mother’s Day this year, Mike and Vikki, my son and daughter-in-law, gave me a Fitbit Flex.  At first it seemed like a fun new toy. I wore it most of the time, but sometimes I forgot to put it back on after my shower. I liked how it kept track of my sleep and reminded me to drink more water. After a few weeks, I decided to set a goal to lose a few pounds. I chose the easy path because I wasn’t serious about it. I did my best to record what I ate each day. What I liked most about the Fitbit was that I was in control. Unlike diets that tell you what to eat, I could choose what I wanted. All I had to do was make sure I burned more calories than I consumed.

My Fitbit would probably have continued to be no big deal if it hadn’t been for what happened  Memorial Day weekend.  I received an unexpected email from Vikki, inviting me to join a weekend warrior challenge. It sounded like fun and so I accepted. Soon after that, I remembered that Mike and Vikki planned to go on a long hike that Saturday. I figured I didn’t stand a chance of winning. By the end of Saturday, I was in fourth place even though I had 20,000 steps. But there was still another day left and now Mike and Vikki were tired from their long hike the day before. Just like the tortoise that won the race against the hare, I kept walking on Sunday and managed to sneak by everyone with more than 40,000 steps for the weekend.

Of course, I was elated with my victory over a group of people more than twenty years younger than I am. In fact, I liked it so much, that I went looking for other groups to compete in.  I joined a group called “Born in the 1940s.” Since I was born in 1948, I am a baby in that group.  The goal of the group is to still be walking in the 2050s.  I have a personal goal to live to be 100,  so this seemed like the perfect group to join. Currently, I am in tenth place behind nasamike. I think I’m doing well considering jimmywalkingstick, who is in first place is more than 200,000 steps ahead of me. Close behind me is a lovely lady named Betty.

These are not people I know, but I like to pretend that I do know them. I picture nasamike on a tread mill on the International Space Station. He even gets some of his steps by walking on the ceiling and the walls. jimmywalkingstick might be this man I encountered once who runs to the bottom of the Grand Canyon and back out every day. I think of Betty as a friend who is walking with me, encouraging me to keep going.

If I had a friend who nagged at me every day about what I ate and how much I exercised, I would probably avoid that friend. But my Fitbit isn’t like that. My Fitbit sits passively on my wrist until I ask how I’m doing. Then my  Fitbit  gives me a peptalk, calling me champ because I walked ten miles in a day or awarding me badges for walking 250 miles. (Which of course I deserve because that’s like walking to the bottom of the Grand Canyon and back ten times.)   Fitbit, my friend,  I’m glad I met you.