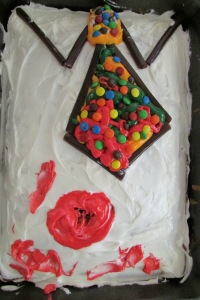 Last Sunday was Father’s Day, and I hope all the dads out there had a fun, relaxing day. The Handy Helpers wouldn’t miss this opportunity to tell their dads how much they love them. Here’s some of what happened in Bluesky on Father’s Day.

Melissa was on her way to the kitchen with plans to make breakfast for her family. It would be a Father’s Day surprise. Last year her dad had been stationed in Afghanistan. They wished him happy Father’s Day on Skype. He told them he had limp bacon and runny eggs for breakfast. Melissa promised that when he was home, she would make him some of her famous pancakes.

As Melissa passed her parents’ bedroom, she noticed her sister Trisha crouched in front of the door, holding a present between her knees. “Come on and help me with breakfast she whispered. Let Mom and Dad sleep as long as they can.”

In the kitchen, Melissa poured the ingredients for buttermilk pancakes into a bowl and handed Trisha a spoon. “Mix this up while I cook the bacon. I’m going to make it nice and crisp, just the way Dad likes it.”

As she watched the bacon sizzling in the pan, Melissa thought about how much their lives had changed in the two weeks since her dad had been home. At first, she was really excited about doing lots of things with him. But sometimes her dad was in a bad mood and just wanted to lay in the hammock in the back yard. Other times, he wanted to know everything she was doing. He expected her to ask permission to do things her mom always let her do—things like talking on the phone or fixing a snack. “He’s just trying to figure out what his role is in our family,” her mother had told her. “Give it time, and everything will work itself out.”

Melissa was trying to be patient, but she wondered if things were ever going to get better. “Good morning,” she said as her dad came into the kitchen. “Happy Father’s Day.”

“It sure smells good in here,” Cody looked at both his daughters working together. “Looks like you two have everything under control.”

“Happy Father’s Day, Daddy,” Trisha ran to him and put her arms around his waist. Cody bent down and kissed the top of his young daughter’s head.

“It’s sure nice to be spending Father’s Day at home with my girls.”

“Change your clothes,” Emma told her daughters as soon as they arrived home from church. “We’re supposed to be at the Smith’s at one o’clock.”

“You’re not taking that cake!” Laura exclaimed as she looked at the food her mother packed to take to the Smith’s. There in the back of the Suburban among her mother’s superbly delicious red beans and rice, pecan pie, and pralines sat Laura’s not-so-nice-looking Father’s Day cake.

“Of course we’re taking it,” Emma said matter-of-factly. “Why wouldn’t we?”

“It just doesn’t look as good as I was hoping.”

“I’m sure it will taste great. That’s all that matters.”

Laura squeezed into the back seat along with the folding chairs her father had placed there. Her three sisters were already seat-belted into the middle seats, leaving her no choice. It was only a ten minute ride to the Smith’s, but Laura dreaded every minute.

As the Thomas’s pulled up in front of the Smith house, they saw Spike sitting in the front porch glider. He had his head down and was scraping his feet across the cement. He looked up as they pulled into the driveway.

“Hi,” Spike waved in their direction.

“How about giving us a hand?” Bill yelled  as he opened the clam doors on the back of the Suburban.

“Sure.” Spike came down the steps two at a time.

“Who made this?” Spike asked looking curiously at the cake in his hands.

“Laura did,” Emma told him.

Spike carried the cake into the house. Todd and Jennifer came out the front door to help Bill with the chairs he was taking out of the Suburban.

“Who murdered your cake?” Spike asked Laura as he set the cake on the dessert table.

“Nobody,” Laura said, surprised. “It’s supposed to be a shirt and tie.”

“Yeah,” Spike commented, “with a bullet hole in it!”

“I had a little trouble with the frosting, that’s all.”

“That’s frosting, not blood.” Spike pointed to the red stains on the cake.