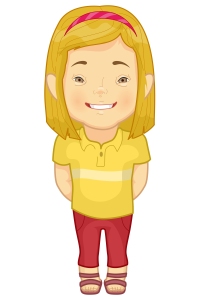 I have been fortunate in my life to know many people with Down syndrome. Any one of them could have been the model for Beth Anne. But as my daughter Kirstin says, “I would like people to remember that even though we look alike, we are all unique.” And so Beth Anne is her own unique person.

When I first began envisioning the plot for the second Handy Helper book, Seven is a Perfect Number, I knew that Melissa would be challenged by a new girl in town who would threaten her friendships with Laura and Amber. But when Beth Anne showed up, I was totally surprised. I hadn’t considered that the new girl would have Down Syndrome. And yet, there she was.

When I think about it now, I can see that Beth Anne is the perfect person to shake Melissa’s self-confidence. Beth Anne is the opposite of Melissa in so many ways. To begin with, Beth Anne is timid and shy while Melissa is bold and outgoing. Melissa is concerned about her appearance, wearing the latest clothing fads and then accessorizing to the hilt.  As Amber says, “She dresses to the nines” (sometimes the eighteens or the twenty-sevens). Beth Anne is happy to be dressed in comfortable clothes. And even though she rarely gets anything new, she is okay with that. When Beth Anne is going to church with her grandmother, Doris buys her a dress–one of the few dresses she has ever owned.

The biggest difference between Melissa and Beth Anne is how they treat others. Melissa is friendly and helpful, but often puts her own needs ahead of the people she is helping. Beth Anne reaches out in a loving way and gives fully of herself. The difference becomes obvious in the way the two girls respond to Mrs. Henry. Melissa sees her as a grouchy old lady who needs help but doesn’t appreciate it. Beth Anne sees a lonely woman who wants someone to care. While Melissa is busy dusting Mrs. Henry’s living room, Beth Anne sits on the sofa and gets Mrs. Henry to talk about her photo albums.  It is Beth Anne who coaxes Mrs. Henry out of her wheelchair so she can walk again.

Little by little, the Handy Helpers realize that Mrs. Henry is changing from a grouchy old lady to a sweet, kind friend. All of them know that it is Beth Anne’s influence that is bringing about the change–all of them except Melissa. But even Melissa can’t fight the obvious forever.

It is not until Beth Anne is rescued from the mountain, that her impact on the Handy Helpers becomes apparent to all of them. Beth Anne’s willingness to give of herself so completely, rubs off on each member of the Handy Helpers and is reflected in tiny acts of grace. Chris lets Elizabeth Sawyer win the Sunday school contest even though he has more scripture verses. Spike has been avoiding Connor, the little boy who tries to be like Spike. But in the end, Spike becomes his friend and even brings him to Melissa’s birthday party. Although Melissa had been trying to keep Beth Anne out of the Handy Helpers, it is Melissa who insists that the group won’t be complete until Beth Anne is the seventh member.

Like the Handy Helpers, I’m so glad that Beth Anne came to live in Bluesky. Our lives would not be the same without her.