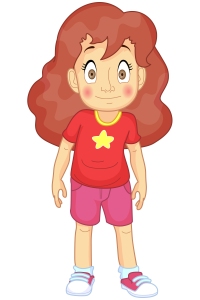 On Tuesday afternoon, Amber was surprised by a phone call from Doris Duncan. She asked if the Happy Helpers could come to her house after school on Wednesday to give her a hand at watering her plants. Amber was so excited she said yes about six times.

On the way to Doris’s house, Amber told her friends what to expect.

“Doris has the cleanest house I’ve ever seen,” Amber said. “We’ll have to be very careful not to make a mess anywhere.”

When they rang the doorbell, Doris yelled for them to come in. She was seated on the sofa in the living room as she had been when Amber was there with Betty.

“It’s so nice of you girls to give up your afternoon like this,” Doris said. “I can usually manage by myself, but with this darn back, I decided I’d better get a little help.”

As Doris instructed them, they carried the plants into the kitchen. Doris had slowly made her way to the sink. As each plant was placed in the sink, Doris used the sprayer to water the plant. Then she asked one of the girls to remove it from the sink so it could drain. The plants that were too high for them to take down were watered using a watering can. Melissa, who was tallest, volunteered for that job. She stood on the step stool Doris had her get out of the laundry room. With that, she was able to reach every plant.

“You girls did a wonderful job,” Doris said when they were finished. “I’d like to pay you something for your trouble.”

“We’re volunteers,” Amber explained. “We do it because we want to help others. We don’t expect to be paid.”

“Isn’t there anything I can give you?” Doris asked.

“Your plants are so beautiful,” Laura said. “Can you tell us your secret?”

“Of course,” Doris said proudly. “It’s very simple. I talk to them.”

“And that works?” Melissa looked doubtful.

“Well,” Doris said, waving her hand around the room to indicate the plants, “what do you think?”

“It must really work,” Melissa said with surprise.

“I’ll tell you what,” Doris continued. “If you girls come back and help me next Wednesday, we’ll take cuttings from some of the plants, and then you can take them home and grow your own plants.”

“Of course.” Doris smiled. “It’s the least I can do to thank you for all your help.”

Friday was Good Friday, so there was no school. Mary took the day off from work so that she and Amber could have a girls’ day out. They both got up early to take Domino for a walk. Either Mary or Kyle walked Domino every day.

Amber hadn’t been allowed to walk Domino by herself since he was five months old. Something happened that made her parents decide Domino was just too much dog for her to handle. Amber had been walking him on the next block, when Domino spotted a rabbit. Domino and the rabbit stared at each other for a minute. Then the rabbit took off running. Domino tried to run after the rabbit, but with Amber holding on as best she could, he wasn’t able to catch it. When the rabbit ran under a wire fence, Domino tried to follow it. He dug at the ground, throwing dirt all over Amber. The rabbit just sat there on the other side of the fence, taunting Domino. Finally, Domino gave up trying to go under the fence and went over it instead. He would have pulled Amber over after him, but she let go of the leash. The rabbit hopped away across the yard with Domino hot on its heels. When the rabbit went under the fence on the other side, Domino continued over it. Amber ran to the alley to cut them off, but they were nowhere in sight. After looking for Domino for twenty minutes, she went home. Kyle jumped on his bike and rode around the neighborhood, calling Domino. He told Amber to stay home in case Domino showed up there. By the time Kyle caught up with Domino, he had terrorized someone’s cat, torn up a flower bed, and eaten another dog’s food. Kyle and John went back the next day and fixed the flower bed, but they all agreed that Amber’s days of walking Domino were at an end.

After their walk, Mary and Amber got dressed up to go shopping. It was their annual quest to find the perfect Easter outfit. Before starting their journey, they attended the Good Friday service at church. As they walked into the church, Amber spotted Mrs. Snow sitting by herself in a pew.

“Hello, I’m Mary Snyder. Amber told me you are the volunteer coordinator at the senior center.”

“That’s right,” Mrs. Snow said. “It’s nice to meet you. You have a very fine young lady there.”

“We think so.” Mary gave her daughter a squeeze. “Thank you for giving the girls another chance. I’m sure they won’t let you down.”

“No one can figure out what happened with the spoons,” Mrs. Snow said. “But I thought I should at least give them the benefit of the doubt.”

“We’ll be there tomorrow,” Amber promised. “And we’ll do exactly what we’re supposed to do.”

“I’m sure you will,” Mrs. Snow said. “We got off to kind of a rocky start, but I’m sure things will work out fine from now on.”