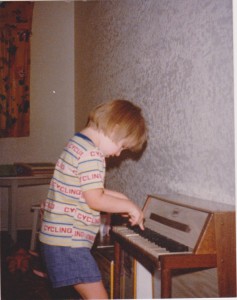 In all the books I’ve read about Down syndrome, I have never seen anything about being dramatic, but I really believe that should be included in the description. Most of the people I know with Down syndrome are dramatic. They are animated, impish, and absolutely adorable actors and actresses. It is my theory that it is a trait carried on their extra chromosome, along with other traits such as being loving and cheerful. Kirstin has been a little actress all her life. When she was a preschooler, she would order french fries from the speaker on the car dashboard. At home one day, I came running as fast as I could when I heard her shrieking. What I found was Kirstin on a stool, holding a doll over the edge. Our cat was circling below, and Kirstin was in the process of rescuing the doll from the dangerous animal.

After Kirstin’s year in kindergarten, we took a trip to Hawaii. It was our summer vacation, but it was a little bit of a business trip for me as the Region Eight vice president for Jaycee Women. At the end of our vacation, there would be a meeting I was in charge of, but first we would have some fun. Kirstin is a great traveler and enjoys seeing new places. We have a picture of her on the trolley on Kauai, singing into her imaginary microphone.

It was at the Polynesian Cultural Center that Kirstin was really a star. We were making our way from island to island, around the exhibits, and at some of them, ladies were invited to come up and don grass skirts to try the traditional dances.  I participated in the Hawaiian exhibit, and Kirstin wanted very badly to join me. She was unsuccessful that time, but when we reached the Samoan Island, there was no stopping her. Before I knew it, she was on the stage. They put a skirt on her that was nearly as big as she was and tied just under her armpits. As the music started, a group of Scandinavian tourists arrived. I wondered what they thought as this tiny girl in a huge skirt stomped up and down on the stage, pumping her arms and shaking her head. It was scary and funny all at the same time.

As I kicked off my meeting on Friday night, I asked my children to provide the entertainment. Michael had acquired a set of poi balls, two balls attached to cords. The balls are swung in circles and crossed over in a sort of juggling style. He had developed some skill with them and performed for my group of ladies. Kirstin followed his act with her version of the hula. By that time she had her own grass skirt. Finally, they sang a song they learned on Kauai. As they sang “I’m a palm tree, I’m a palm tree, I’m a palm tree through and through,” they moved ever closer to their dad who was seated on the edge of the stage. When they reached the end of the song, “But I’d rather be a palm tree than a coconut like you,” they knuckled their dad on the head. It was adorably funny, and I was really impressed with both my children.

From: This Little Light of Mine, A woman with Down syndrome shines brightly in the world. This book is available on Amazon