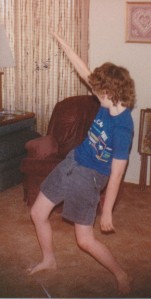 My mom  says I have a very eclectic taste in music. That means I like all kinds of music.  I’ve always been  a huge Amy grant fan.  I have so many Amy Grant songs I love, it’s hard to choose one, but I think “Thy Word,” is my  favorite. Sometimes we sing it in church.

When I was a small child, I had a cassette player that I took everywhere I went. Back then, I played all the Disney music. I still love Disney music and I listen to it sometimes.

As a kid, I liked most of the pop music.  I was a huge fan of the  New Kids on the Block. I remember being teased in school because I liked to wear my New Kids on the Block T-shirt.  Later,  I listened to other boy bands like the  Backstreet Boys and Boys to Men. I still think they are cool. Of course, I danced along with Michael Jackson videos. At Halloween time, they always play “Thriller” at the dance. It is so much fun acting like a zombie. Debbie Gibson and Hilary Duff were  some of my favorite artists.

David is a huge Luke Bryan fan and of course I am too. David has all the CDs and I have a lot of them. Sometimes we sing karaoke when David is at my house. “This is my Kind of Night” is one of the songs we sing.  David and I both like country music. I think it is important that we  like the same kind of music.  David and I went to a Band Perry concert at Cliff Castle Casino. It was great to see them in person. We were dancing in the aisles.

Even though we are huge country music fans, David and I like other kinds of music.  I like Celine Dion.  David likes Elvis music. I think that’s because David looks like Elvis Presley and Luke Bryan all rolled into one. He is the total package–actually two of them. I like the beach boys.  I even like Gretchen Wilson and her band, Wilson Philips.

When I lived with my grandmother, I learned to enjoy the oldies. That was what she played on the radio all the time. I’m talking about real oldies like Patti Page, Doris Day, and Frank Sinatra. My grandmother even introduced me to Lawrence Welk. I was just crazy about all those bubbles.