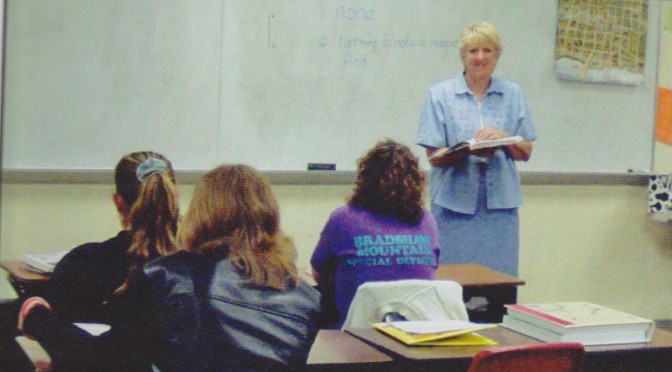 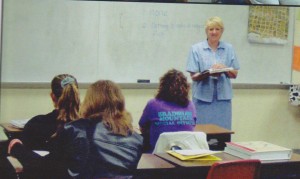 I’ve heard Dr. Phil talk about an “aha moment,” one of those times in a person’s life that will always be remembered, because it was at that very moment something life-altering occurred. I had one of those moments in 1979. Kirstin was attending the regular preschool, and her teacher and I were having trouble communicating about her progress.  Flo suggested that we keep a notebook at the preschool. She would write in it each day, and so would I.

Everyday, I wrote about Kirstin’s accomplishments. “Today Kirstin asked a question. Kirstin helped make her bed. Now Kirstin can put on her shoes.”

As I have said, Kirstin’s attendance in the regular preschool pointed out many areas where she fell behind. Every day Flo would write about something Kirstin had trouble with. “Today, Kirstin wouldn’t participate with the other children. Kirstin had trouble using scissors. It is hard for Kirstin to color inside the lines.”

Every day, I read Flo’s comments and felt more and more frustrated. One day after reading all the things that Kirstin couldn’t do that day, I wrote, “Isn’t there anything Kirstin can do?” That was my aha moment. It was at the moment I decided to become a special education teacher. I would focus on what students were able to do and use that to build upon. That way we would focus on the positive not the negative. If you can do one thing, I surmised, you can learn more, and there’s no way to tell how far that can take us. That has stayed my teaching philosophy for twenty-nine years.

It was during my course work in special education I had another experience that contributed to what would later become my teaching philosophy. One of my professors had worked at the Coolidge facility and related this story to us. He was looking in on some of the residents, and while he was there he told a joke to the nurses. They didn’t get the joke, but a woman with cerebral palsy laughed. Her cerebral palsy was so severe that she could not move her arms or legs, nor could she speak. Confined to a bed or wheelchair, she required constant care as if she were a baby.

The fact that she laughed intrigued my professor, so he decided to try a little experiment. Arranging the room so she could not see him, he told another joke. Again she laughed. This was repeated, and in every instance, she laughed at the appropriate time. Certain that her brain activity was much more than anyone knew (people with cerebral palsy can have average intelligence and above), he decided to develop a program so that she would be able to communicate and learn.

Before he could put his plan into effect, the family of the woman took her home for Christmas. While she was there, she developed pneumonia and died. It struck me as so tragic that, for her entire life, she had been unable to express to others the extent of her understanding of what was going on around her. And now that someone had discovered the truth about her, it was too late. That story has stayed with me, and it is the reason why I never give up on a single student. How do I know if the next thing I try will be the answer?

From This Little Light of Mine, a woman with Down syndrome shines brightly in the world. Available at amazon